Seyi  Makinde On The Starting Block.

Having overcome the initial shock of clumsy Public address system, Seyi Makinke, an Engineer launched his governance to a beautiful beginning yesterday at the ancient Liberty stadium yesterday.

Before reading his prepared address he apologised for the shoddy sitting arrangement at the stadium and the state box in particular. The arrangement was not only wobbled, it was also chaotic. It took the governor himself several minutes to access his seat.

Let’s not heap too much blame the organizers, they were overwhelmed.  The crowd was unprecedented.  I have never witnessed a living man being honoured as such. Every available space was taken, and we are not talking only about the seats but the playing feed as well.

Seyi Makinde said and I quote ‘I apologise for the sloppy sitting arrangement today but I accept the responsibility’. That is how it should be, you delegate authority but not responsibility and somewhere during the, he said we should hold him accountable for all the deeds of the government. He knows and said so, the bulk stops on his table.

Highlights Of The Speech.

One thing crossed my mind yesterday. Under the simple look may be a stern and no-nonsense personality. When he was doing the honour parade, some overzealous fans spayed him with some water as a symbol of Omititun. You should have seen the look on his face and  I am sure those who handled the sloppy public address system must have had a share of his tongue.

It was a pretty good start, may the Governor end well.

Obaseki, The Fall Of A Humbugged, Deluded Political Bounder And Ingrate 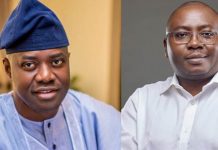 The Real Reasons Why Daura And Kyari Are So Powerful