TUNDE IDIAGBON shook the world in 1985. He was in Saudi Arabia when the regime of his best friend, his boss Muhammadu Buhari was overthrown. He was declared wanted by the new regime after the regime had arrested Buhari. Saudi Arabia gave Idiagbon immediate asylum without requesting for it but Idiagbon refused, he said “I cannot abandon my friend and ally because of fear of death. I believe in our ideology and mission for Nigeria, I will go back to Nigeria to join Muhammadu Buhari….”. After much but futile persuasion, Saudi gave up and Idiagbon travelled back to Nigeria. He landed at Murtala Mohammed International Airport, he received his last salute and gave his own too, he was arrested thereafter. Idiagbon endured the tribulations with Buhari. That is a TYPICAL YORUBA MAN’S ATTITUDE.

OLUSEGUN OBASANJO was in Copenhagen in 1995 when Musa YAR’ADUA was arrested for coup plot which was supposedly planned by both men. Failed coup plot attracts maximum sentence. Denmark offered OBJ asylum, he refused. He couldn’t abandon his friend and Deputy in the hand of their accuser. OBJ flew back to Nigeria, he was in prison with YAR’ADUA. He never abandoned his friend at critical moments. That’s a TYPICAL YORUBA MAN’S ATTITUDE.

ADEKUNLE FAJUYI in 1966 was hosting Ironsi in Ibadan when his guest was arrested by his assailants, they asked FAJUYI to go in peace but he chose to be arrested and receive same judgment passed on his guest as he wouldn’t betray his guest. He got exactly what he requested. That is a TYPICAL YORUBA MAN’S ATTITUDE.

MKO ABIOLA returned to Nigeria in 1993 to stand by the masses who were on the streets struggling for the actualisation of June 12. He said “My life is not bigger than those who are constantly attacked on the streets”. Abiola could have stayed in America but he came back to join his people in the struggle. That’s a TYPICAL YORUBA MAN’S ATTITUDE.

BOLA AHMED TINUBU in 2015 stood firmly with his friend Muhammadu Buhari against all odds. He was called different names by his adversaries, he stood firmly and campaigned rigorously. In 2019, he was even firmer. TINUBU defiled all unprintable names given to him by haters of decent democracy, he stood by Muhammadu Buhari. Aftermath of this, in 2020, he was singled out for mob. His state was bombarded, his assets were vandalized but GOD is with him. TINUBU did what nobody did for Buhari positively, he received nothing personally positively but he was the greatest receiver of attacks that emanates from the haters of the government. Bola Tinubu stands till date with Muhammadu Buhari. That’s a TYPICAL YORUBA MAN’S ATTITUDE.

A TYPICAL YORUBA MAN will not abandon a cause he spearhead when his people are in trouble. They don’t fight democracy, they defend democracy. They’re the first person to handover as a military man to a civilian president. And also the first civilian to handover to civilian. They are the initiator of Free Education, First Television Station in Africa. They stood with and immortalised MKO. THEY struggled until June 12 becomes Democracy Day. They are the builders of Nigeria. They’re the pillars that hold Nigeria from breaking. They are the promoters and practitioners of civilization and sanctity of human rights.

Good Day to all Progressives Nigerians!!!!

FFK: A Vulgar Striker On Transfer. 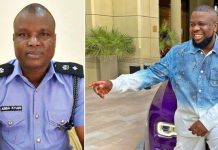 Abba Kyari, The Brilliant Corp Who Erred On The Side Of Judgement.

“MARK MY WORDS, WAR WILL SOON BREAK OUT IN NIGERIA”–Olusegun Obasanjo